After World War II (WWII) the Japanese economy was a fraction of what it was before the war. The United States led the occupation and reconstruction of Japan from 1945 until 1952. At which time, sweeping reforms were enacted.

During the Korean War from 1950 until 1953 the Japanese economy began to grow, as military demand for textile products was strong. After the Korean War the Japanese economic growth continued. Toyota was looking to expand outside of Japan. Toyota Motor Company began in Torrance California in 1957. An old 3000 sq ft Rambler dealership in Hollywood, California became Toyota’s first United States headquarters in 1958.

The Toyota Toyopet Crown was introduced in Japan in 1955. In 1958 it was the first Japanese car imported into the United States. It was also Toyota’s first full-scale passenger car, although small by American standards. The Crown was sold in the US from 1958 to early 1970s. It offered six passenger bench style seating. Toyopet Crown came equipped with drum brakes and an on the column three speed manual transmission. The 1958 Toyota Crown had an over sized cooling system, vinyl upholstery and a two-speed windscreen wiper. It did not have an outside driver side mirror. No seat belts as they were not invented yet. Two unique features were an electric outlet and suicide doors. In the case of emergency the ‘58 Crown could be started by hand crank like the Ford Model T. It was heavy and built solid. A lot of steel was utilized in the construction. In 1958 the average American family earned $5000 per year. With a $2000 price tag and a 1.5L 58 horsepower engine pushing almost a ton and a half of vehicle, the 1958 Crown was said to be under power and over priced. It was simply no match for the powerful V8s that graced US roadways. Toyopet Crown did offer fuel efficiency and reliability; qualities Americans would later learn to appreciate. The Crown was designed for Japanese unpaved dirt roads. Thanks to President Eisenhower, America had coast to coast paved freeways.  Cars in the States were routinely driven at highway speeds for extended periods of time. The Crown struggled to reach 55 mph. At that speed, the vibration was said to be so severe the driver could not see out of the rear window. In Japan cars were rarely driven above 40 mph. Not to mention the Toyota Toyopet Crown had ‘toy’ and ‘pet’ in its name, two words not associated with automobiles in America. Additionally, Japanese products were thought to be of poor quality, cheaply made and inferior. It also has to said, in the post World War II era, the label “Made in Japan” had a negative connotation. To buy a car made in the country that attacked the United States in 1941 was viewed: as unpatriotic by some Americans; treasonous by others.

Although successful in Japan, the Toyota Toyopet Crown was soundly rejected by the American car buyer. Less than 300 were sold that first year. In 1959 a little less then 1000 Crowns were sold. Still not nearly enough. In 1960 more than 435,000 Ford Falcons were manufactured. Most of them found their way onto American roads and highways. Less then 700 Crowns were sold in 1960. Americans were in love with the automobile. That is not an overstatement. Toyota knew if they could sell cars in the US, they could sell cars anywhere. Toyota stopped exporting the Crown to the United States in the early 1960’s. After some tweaking, the Toyopet Crown returned to the States until it was mercifully pulled for good in the early 1970’s.

Toyota wanted one more bite of the apple, one more turn at bat. They knew they had to get it right this time. Toyota did get another chance.

The 1973 and 1979 gas crisis hit and hit hard. America was forever changed. Drivers waited for hours in long lines sometimes stretching for blocks. Many were pushing their cars to often empty fuel stations. Fights breaking out in these long lines were an all too common occurrence. Phrases like gas-guzzlers and gas rationing were used. Gas-guzzlers were typically large heavy vehicles with powerful inefficient big block V8 engines. The uniquely American V8 was a source of tremendous pride. Speed and performance were the objectives. Before the 70’s energy crises, gas was plentiful and cheap, about $0.39 per gallon. Fuel efficiency was a minor consideration if at all. After the crises, many saw gas-guzzlers as a scourge, almost un-American. Gas rationing was instituted where by drivers with license plates ending in even numbers could purchase gas on even days; drivers with license plates ending in odd numbers could purchase gas on odd days. Gas rationing was used also to limit the number of gallons each driver was allowed to buy. Rationing while inconvenient did reduce the number of cars with drivers in long lines to buy fuel.  Some desperate car owners siphoned gas from another person’s vehicle to put into their own. Locking gas caps were used to combat gas theft. To conserve fuel, the United States Congress passed the National Maximum Speed Law reducing the national speed limit to 55 miles an hour.  These conditions were simply intolerable to Americans used to hopping in their cars and going whenever and wherever they wanted.  US car manufactures were ill-prepared. Americans began looking to car makers offering more fuel efficient vehicles.

Toyota learned from the Crown. The next vehicles Toyota sold in America would be built for America. The US auto buyer was willing to take another look at Toyota. This time Toyota had what Americans wanted: Corona (crown in Latin) and later the Corolla. Unlike before, Toyota was able to take full advantage of this opportunity.

The 14th generation Crown is now over 60.  With the exception of Land Cruiser, It has been manufactured longer than any other Toyota vehicle.  Although still very popular in Japan, the Crown almost killed Toyota’s prospects in the States. Were it not for Corona, Corolla and the energy crisis, Toyota might have disappeared from the United States altogether.

By the time the 1980s rolled around Toyota and other Japanese car manufacturers had established a strong U.S presence. Japan imports were seen as a threat to American sovereignty and security. In an effort to protect American automakers, American jobs and American raw materials such as steel, taxes were imposed on Japanese imports. Congressman Jack Brooks, a witness to Vice President Lyndon Johnson being sworn in as President after President John Kennedy was assassinated in Dallas in 1963 and famously known for his cigar chomping, lamented the fact that only two atomic bombs were detonated over Japan and not four according to Nikkei Asian Review. Today’s American-Sino rhetoric although heated at times is mild by comparison. After WWII: Japan became a protectorate of the United States; by the 1980s, exports to the U.S. constituted a large part of the Japanese economy. It was in their interest for the Japanese to make concession, they did. In 1986 the Corolla was the first Toyota built in the United States. 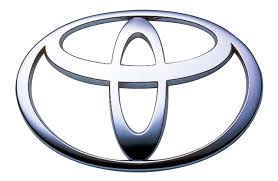 The now iconic Toyota logo was introduced in 1990. The three Toyota ellipses are identifiable both head on or through the rear-view mirror. The ellipses symbolize uniting of the heart of the customer with the heart of the product. The background represents technological advances and boundless opportunities ahead according to Toyota.  A blue background indicates a hybrid vehicle. It is unclear if by accident or design, the ellipses however can be arranged in such a way as to form the letters in Toyota.

In 2017 Toyota Motors American moved its 6500-personnel headquarters from California to Plano Texas near Dallas-Fort Worth. Toyota now has: some 1500 dealers in the United States; manufacturing plants in Alabama, Kentucky, Indiana, Texas, West Virginia, and Mississippi.